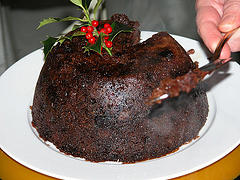 It’s ‘Stir Up Sunday’ this weekend, the last Sunday before Advent and the day to make your Christmas pudding! This tradition dates back from the nineteenth century into the mid-twentieth and has enjoyed a recent revival. The ‘Stir Up’ actually refers to a phrase in the Book of Common Prayer, but it is also a great time to make the pudding to allow all the ingredients to mature.

The Christmas pudding as we know it might have undergone some changes but it has more than a passing similarity to the medieval dish ‘frumenty’. A porridge style meal, it was made of boiled wheat, meat, dried fruit, eggs and spices when available.

If you fancy making it, there is a recipe on this interesting site.

If that recipe is not tempting your tastebuds, there is a more traditional recipe, along with a history tracing the evolution of the pudding here.