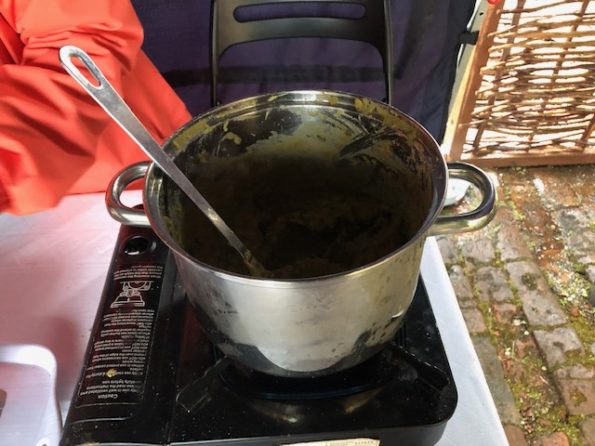 Making a meal of Open Days

“The rain it raineth every day”.

Oh and hasn’t it just? June has had a distinctly autumnal feel so far, although on the upside, the garden is looking fantastic! Medieval buildings are often pleasantly cool during the summer months but it certainly can be chilly when it’s cold.

We were therefore surprised, and pleased, to see so many visitors considering how dire the weather had been all week. Looking at the forecast we had resigned ourselves to the fact that we might just be on our own huddled around a vat of pease pottage in an effort to keep warm. 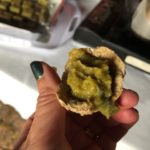 Tasted better than it looks! 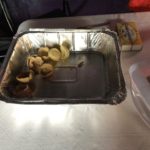 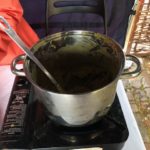 Visitors cleaned us out of pottage

Speaking of the pottage, it went down incredibly well with most tasters saying that they enjoyed it… or that it wasn’t as bad as they had feared it would be! One visitor enjoyed it so much that, after several samples, he claimed to be off home to make some.  If you were that visitor, we’d love to hear how it turned out!

We served the pease pottage on a traditional medieval trencher – basically a plate made of bread – in rather non medieval style mini-trenchers. Perhaps it will catch on and pease pottage vol-au-vents will be sweeping the nation by Christmas.

Of course, our usual delicious homemade cakes were available in the tea room for anyone who was not enamoured of the idea of pottage! 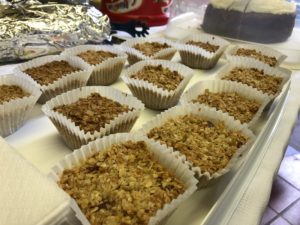 We also had an insight into the fascinating rules of Tudor table manners.  Our volunteers set this up as a game, a taste of which is below. 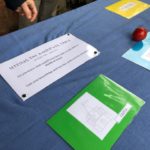 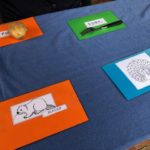 What would be on the table?

A few comments from the visitors book illustrate the enthusiasm with which the day was received:

“So interesting and inspiring. Wonderful volunteers, wonderful cake!”
“Very well done especially the pease pudding and the strawberry chocolate
cake. An unexpected gem.”
“Very interesting. Have wondered about these buildings for years. Great to
hear some fascinating facts.”

It was very heartening to see that the rain did not stop play with other great events across Coventry, including a Wellbeing event at the Herbert, including the Weavers’ Workshop, and Positive Images Festival. Heritage and culture fans seems to be a hardy bunch! 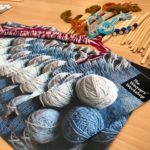 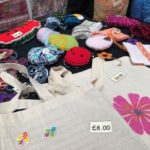 Creations by the Workshop members

Our next Open Day is in July when we’ll have all the usual tours and refreshments, and we’ll have some added archaeological interest thanks to CADAS (Coventry and District Archaeological Society). Do join us on Sunday 21 July from 11am until 4pm.