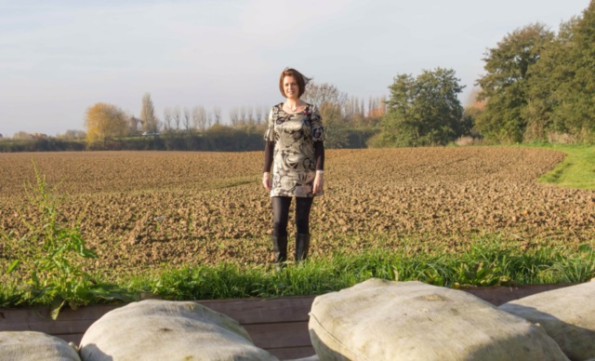 Guest blog: Visit to the battlefields of WW1

Clare Chamberlain shares her personal account of a visit to a site with a family connection to The Weaver’s House.

On 12th November 2015 I had the privilege of being able to visit the place where my great-great uncle, James O’Neil, had fought and been fatally wounded during WW1. I was able to stand not far from the trench where he would have been, exactly one hundred years ago to the day.

It’s thanks to Nick Fear and the Birmingham War Research Society that I found the farmer’s field in France where the 15th Battalion Durham Light Infantry held the trenches just outside the town of Houplines. As I looked over the field I could see a dip running across where the trench line would have been and in the earth at my feet were bullets from shells, brought to the surface by recent ploughing. Standing there in the sunshine it was hard to imagine the noise and terror of a hundred years ago. 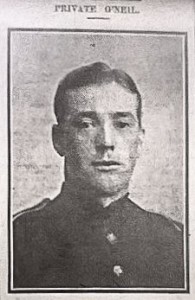 James was the youngest son of Eliza and James O’Neil, born in Spon Street, Coventry in 1892, and had joined the Durhams in September 1914, shortly after the outbreak of war. As a boy he’d lived with his mother and siblings in 122 Spon Street (now known as The Weaver’s House, 122 Upper Spon Street). 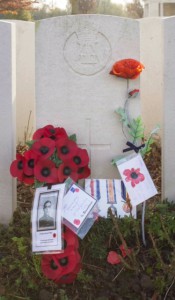 The grave of James O’ Neil with poppy wreath.

Later the same day I visited James’s grave at the beautiful and peaceful Bailleul Cemetery and left a poppy wreath along with a photo of his medals (which are thankfully still in the safe keeping of a family member). The rows of graves at Bailleul run mostly in date order as it was near a Field Hospital; James is buried alongside men who died the same day, 13th November 1915. The cemetery is kept immaculate by the Commonwealth War Graves Commission in honour of these brave men, and it’s heart-warming to think that they will continue to be visited… who knows, maybe James will be visited by one of my descendants in another 100 years’ time.