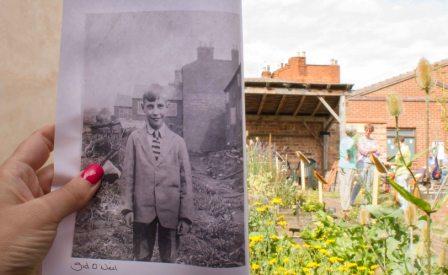 Volunteer Clare Chamberlain shares her personal account of how research into her family history led to a special connection with The Weaver’s House.

“Would you like to go and see where I was born?” asked my Grandad one Sunday afternoon.

I used to come over to Coventry to visit my grandparents and usually the routine was the same. A cup of tea and a chat, a light lunch and maybe a few family history questions before my journey home. Like many older people, talking about the past didn’t come naturally so this offer took me by surprise and I jumped at the opportunity to learn a bit more about my Grandad’s life.

I’d been looking into my family history on and off over a number of years, gathering stories and photos wherever I could. I knew Grandad’s family were from Coventry and I’d found numerous addresses from birth certificates to tell me where they’d lived. But all those houses were gone, either destroyed in the War or pulled down since. So where on earth was he taking me?

We headed towards the city centre and I followed his directions until we pulled up in a fairly run-down looking street. The main row of houses was derelict and boarded up.

“That’s the house I was born in” said Grandad pointing to the middle of the row. “122 Spon Street; I grew up here and went to school just down the road. The house was tiny and too cramped with all of us living in there; I left to join the Army as soon as I could”. 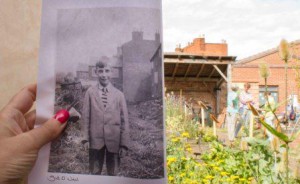 A photo of Sidney O’Neil (Clare’s Grandad) as a boy, standing in the garden of The Weaver’s House, matched against the current view.

He told me his father, Joseph O’Neil, had also run his boot repair business from the back room of the house, leaving just one room as the main living area.

Standing across the road from the house, looking at my Grandad’s face while he talked, I knew I needed to always remember this moment. I suddenly remembered that I had a camera in my car. “Stand by your old front door Grandad, so I can take a picture”. Great! A photo of Grandad outside his birthplace 77 years on!

That day was the last time I saw my Grandad, and that photo was the last one ever taken of him. It was April 1997 and he died in the June.

Two years later my Grandad’s cousin sent me a newspaper clipping of an article about the plans by the Spon End Preservation Trust to restore the row of houses in Upper Spon Street. I was pleased to hear that hopefully they could be saved.

Life moved on and became very busy; family history went on the back burner for a time. But one quiet morning, whilst my young daughter was napping, I got out my old note books and started flicking through them. I found the old newspaper article and wondered what had become of the houses. After a quick search on the internet I was stunned to see that not only had ‘Black Swan Terrace’ been restored, it was also open to the public, and the house where my Grandad lived had become the main focus for visitors, the ‘Weaver’s House’. I contacted Carol de Rose who was part of the Trust, and soon arranged to go and visit the house on one of its Open Days.

And so I found myself walking, literally, in the footsteps of my ancestors, through the house that had been home to my Grandad, my Great Grandparents, and also my 2xGreat Grandmother, Eliza. To stand where they stood, to lay my hand on the ancient wood beams that they would have been so familiar with and to touch the wallpaper my Great Grandfather hung; that was an amazing experience. 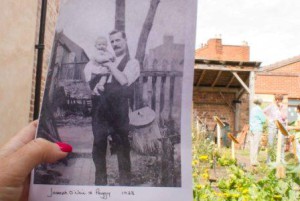 The photo of Joseph O’ Neil and Peggy in 1928 compared to the same view today.

I am fortunate enough to have old photographs of the family taken in the garden in the 1920s and 30s.  On my further visits, when I took my daughter and my Dad, I made sure we too were photographed in the garden. Now six generations of my O’Neil family have set foot at 122 Spon Street.

Thanks to the Trust, Friends and Volunteers, The Weaver’s House and garden are opened up several times a year for the public to visit and I was touched by how many wonderful people gave their time and skills to keep the project running for others to enjoy, so becoming a volunteer seemed the natural thing to do.

I get to spend plenty of time surrounded by my family history and in return I can share my, now expanded, knowledge of the house and its history with visitors and other volunteers. It’s a wonder and delight to see the interested that so many people take in this humble, unassuming house that is such an important part of Coventry’s history. And, for me personally, an important part of my family’s history has been lovingly preserved and kept alive for many more generations to come. 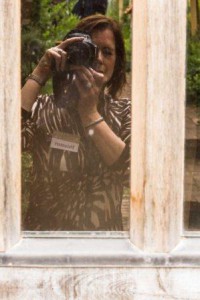 To read more from Clare Chamberlain click the relevant tag at the top of this blog post.