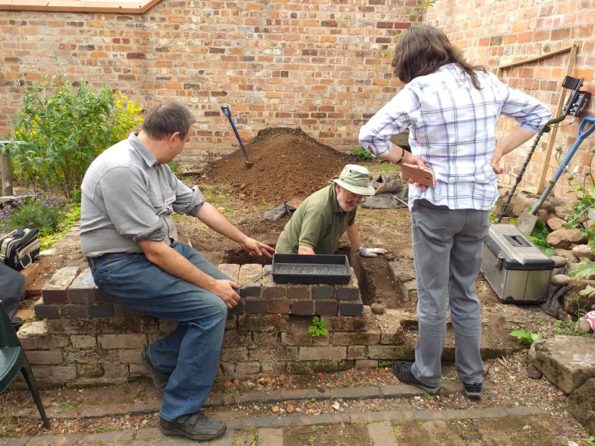 On our July 2019 Open Day, we invited special guests Coventry And District Archaeological Society (CADAS) who offered to dig a test pit on site.

Here is their report:

An area at the rear of the terrace was selected for the excavation of a one metre square test pit.

This was to confirm whether or not any archaeological features existed in this area of the garden, prior to intended work within the area.

The excavation took place during an open day, during which members of the public were able to observe the work as it progressed, and examine any finds.

Following excavation of the pit to the natural horizon, no features of an archaeological nature were found. 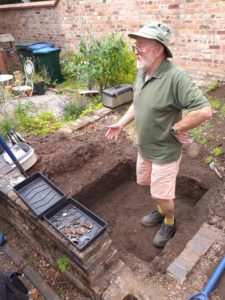 Due to time constraints the pit was excavated using a garden spade, with a trowel used to clean up after each spit (spade depth) was emptied, so a photograph could be taken.

Below spit 3 was the natural geology of the site consisting of flood plain alluvium (sand), and water rounded pebbles and cobbles. This is consistent with the site being in close proximity to the River Sherbourne. A small sondage was excavated in the base of the pit to a depth of 40cm with no change in the geology.

The total depth of the pit to the natural geology was 52cm.

Spit 1 and 2. These appear to be a single fill. Finds from them consist of mainly post medieval, with a few medieval pottery sherds, animal bone/teeth, a pipe bowl and stem pieces, a single piece of brown bottle glass, a copper alloy button and a damaged part folded circular copper alloy disc (a microscope examination of the disc revealed no markings or lettering on either side of it). 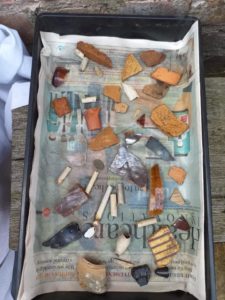 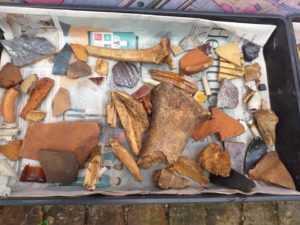 Spit 3. Finds were medieval pottery and an oxidised metal nail.

The finds are consistent with what one would expect to find from the Spon End area, with its long history of occupation over the centuries.

The pottery is all common domestic ware that one would expect to find in the household of the common working class weaver etc, through to the small shopkeepers of the 19th century.

Pipe bowls and stem are found everywhere, dating from the immediate post medieval period through to the 19th C. Due to the fragility of the item, they were just discarded wherever they broke.

Animal bone is nearly always found in early urban environments due to it being thrown out onto the midden heap for later use as compost, or simply buried in pits in the garden.

Metal finds are normally as a result of accidental loss, deliberately being discarded or breaking off from items.

The finds were retained by the Trust.

The excavation was led by Adrian Adams of CADAS, with help from Peterson and David from the Trust.

Washing of the finds was carried out by Christine Adams.

Our thanks to CADAS for their generosity in carrying out the dig and providing the report.